The phenotypic traits of individual cells in a clonal population usually show large heterogeneity and fluctuations even in constant favorable environments. The growth trait of cells is also heterogeneous among genetically-identical cells, which is often referred to as “growth noise”.

In the previous studies, we performed the experiments to quantitatively measure the growth properties of many single E. coli cells with high precision under constant environmental conditions, and revealed the relationship between the distribution of cellular generation time within population and growth rate of population. The results demonstrated that growth noise caused clonal populations of E. coli to double faster than the mean doubling time of their constituent single cells across a broad set of balanced-growth conditions. The growth rate gain of the population was greater when the cellular growth noise was larger, which clarified the significance of growth noise for determining population growth rate.

Furthermore, our measurements revealed an empirical linear relation between the means and the variances of generation times across conditions in E. coli. In other experiments, we found that death rate of S. pombe under favorable constant environmental conditions increased linearly with division rate, suggesting the physiological trade-off between growth and death. These simple phenomenological rules might provide insights into the fundamental constraints on cellular growth and death such as upper and lower bounds for growth rates. 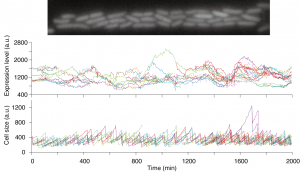